MagicPlay is an open cross-platform audio streaming standard (think “HTTP for music”) that supports synchronized streaming to multiple speakers (like Sonos). For more details, see this Verge story. In the near future you’ll be able to buy WiFi speakers, TVs and other products that come with MagicPlay support out of the box. If you want to try MagicPlay right now, you can turn an existing device such as the Raspberry Pi into a MagicPlay device and stream music to it using doubleTwist Music Player for Android.

If you would like to skip building the source code, you can download a binary package instead.

The MagicPlay service (/etc/init.d/magicplayd) has now been installed and will automatically start on boot.

Note that if you want to use a USB sound card with MagicPlay on the Raspberry Pi, you will need to modify services/audio/src/posix/ALSADevice.cc prior to step #7 and replace “plughw:0,0” with “plughw:1,0” and “hw:0” with “hw:1” (since the USB sound card would be sound card #2).

To get beta builds of doubleTwist Music Player for Android, make sure to join the doubleTwist Google Plus community. Earlier this week, CNET ran an article critical of the permission model of the Android Market. Google’s response to the criticism was that “each Android app must get users’ permission to access sensitive information”. While this is technically true, one should not need a PhD in Computer Science to use a smartphone. How is a consumer supposed to know exactly what the permission “act as an account authenticator” means? The CNET opinion piece “Is Google far too much in love with engineering?” is quite relevant here.

Google does far too little curation of the Android Market, and it shows. Unlike Apple’s App Store, the Android Market has few high quality apps. A study by Larva Labs (the developers of the excellent Slidescreen app) estimates that Apple has paid out 50 times more money to developers than Google has. While the Android Market is available in 46 countries, developers can only offer paid apps in 13 countries (for instance, Canada has only had access to paid apps since March 2010). In addition, the price for foreign apps is not displayed in the user’s local currency and developers do not have the option of customizing pricing by country. To make matters worse, you can’t pay for foreign apps using your Amex card or carrier billing. There’s also no support for in-app payments and changelogs (to communicate app changes).

Below are just a few examples of what’s wrong with the Android Market. Those 144 spam ringtone apps (which are clearly infringing copyright) are currently cluttering the top ranks of the Multimedia category. I was not surprised to find that they were being monetized through Google Ads. Trademark and copyright infringement is widespread in the Android Market: The music downloading app “Tunee” (one of many such apps) is one of the Top Free apps in the Multimedia category with more than 250k downloads. While some would dishonestly try to pretend that such apps are meant for downloading public domain classical music, the developers of Tunee are very clear about their intent. Their screenshot shows copyrighted music by the band Muse (Warner Music Group) being illegally downloaded. These apps are damaging to companies that are building legitimate Android music apps (e.g Rdio, Spotify and MOG), not to mention Amazon whose MP3 store comes bundled with most Android phones in the U.S. Is Google’s strategy to turn a blind eye to illegal music downloading until they launch their own music store?

Developers and users are getting fed up and it’s time for Google to clean up the house.

In defending recent changes to the iPhone SDK agreement, Steve Jobs made a general argument about platforms:

We’ve been there before, and intermediate layers between the platform and the developer ultimately produces sub-standard apps and hinders the progress of the platform.

Is iTunes hindering the progress of the Windows platform by not taking advantage of the latest native Windows APIs? By Steve’s logic, Microsoft should start banning apps such as iTunes from Windows. Unlike the locked down and user-hostile iPhone, the Google Nexus One is not SIM-locked (even when bought subsidized) and ships with a bootloader that can be unlocked to enable custom firmware flashing. More importantly, you can use the Nexus One to make calls that last longer than 10 seconds 🙂

The Nexus One ships with a 2.6.29 kernel but if you like living on the bleeding edge you can install your own kernel (e.g. the experimental 2.6.32 kernel). Below you’ll find an update image I built which includes a 2.6.32 kernel, su, scp and ssh.

Steps to unlock your Nexus One bootloader and install your own firmware:

Note that for security reasons you may want to replace the standard su with something like superuser.

Btw, my company, doubleTwist, is hiring engineers in San Francisco and Android experience is a plus. Perks include a doubleTwist engraved Nexus One 🙂

David Pogue in his Nexus One review last week:

The Nexus doesn’t come with any iTunes-style companion software, either. Enterprising techies know about the free DoubleTwist program for Mac or Windows, which simulates iTunes for the purposes of loading up your phone with music, photos and videos.

This week, Walt Mossberg in a follow-up to his Nexus One review:

Google doesn’t supply any equivalent to Apple’s iTunes or the BlackBerry media-syncing software. However, the third-party program doubleTwist, available at doubletwist.com, is designed to function as a sort of iTunes for syncing Android, Palm and BlackBerry devices.

What are you waiting for? Go download doubleTwist now and sync with your Nexus One 🙂

The Verizon Droid is launching today. The latest versions of doubleTwist for Windows and Mac OS X include support for the Droid. Sync your iTunes playlists to the Droid using doubleTwist! Download iTunes Droid Sync and get all your playlists and videos on your Droid. 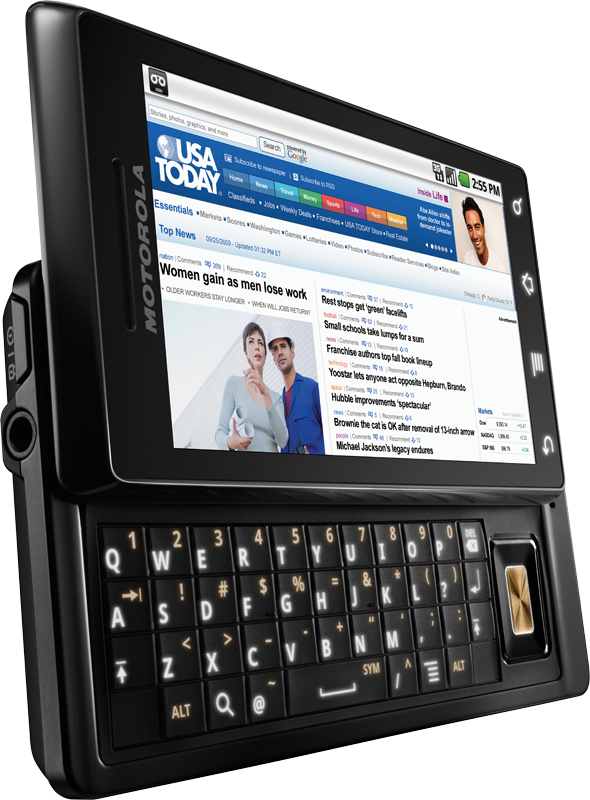 I’ve been subpoenaed in the ongoing anti-trust lawsuit against Apple.


I suggest the plaintiffs lighten up and try The Cure for iPhone Envy: We were going to launch our new ad campaign on Monday morning but the ad company jumped the gun and it already went up today. As soon as I heard I headed over to get some pictures. Head over to Flickr to see the rest of the pictures.